What You Need to Know about THCV 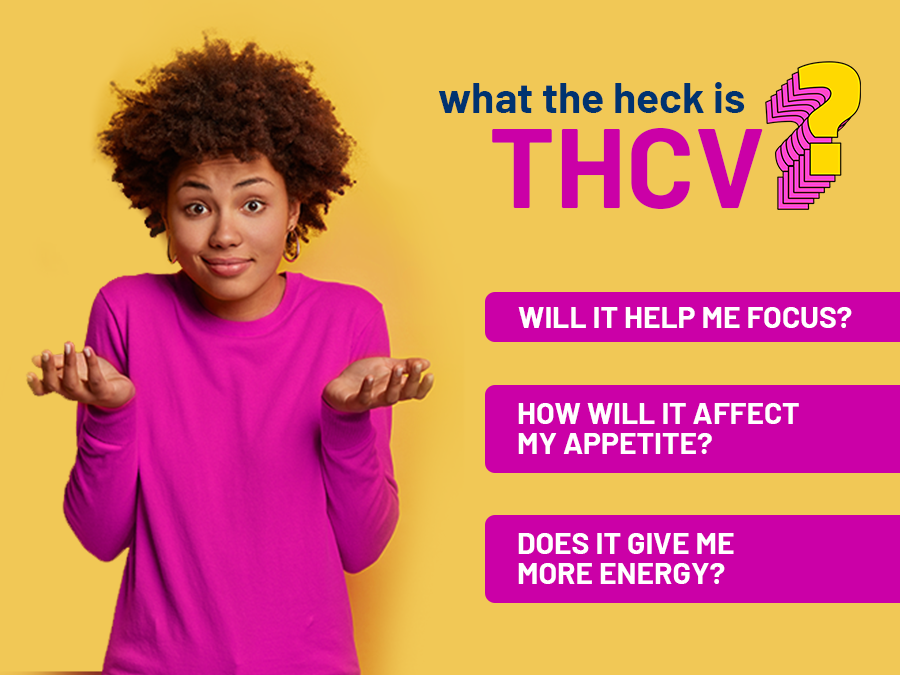 The cannabis industry is chock full of terms that kind of sound the same—but all mean really different things. For instance, you’re probably familiar with CBD, but you may not have ever heard of fellow cannabinoids, CBG, CBC and CBN. THC might be top of mind, but you’re probably unsure about the focus of today’s post: THCV.

THCV, or as it’s more formally called delta 9 tetrahydrocannabivarin, is yet another cannabinoid derived from the cannabis plant. Though public perception of THCV is much lower than the similarly sounding THC, the conversation around THCV has picked up in recent years as more and more people are learning about its abundant benefits. Today, we’ll answer some of the most popular questions surrounding this cannabinoid, tackling topics like THCV effects, THCV strains and types of THCV products.

Before digging into the specifics about THCV, we thought we’d start with one of the basics: What is THCV? As we said above, THCV is a cannabinoid found in the cannabis plant. Among its many advantages (more on that in a bit), it’s believed that THCV may be able to curb the user’s appetite—a benefit that led to the cannabinoid picking up the moniker of “diet weed.”

You might also be asking yourself, “Does THCV get you high?”  While TCHV does have mild psychoactive properties at excessive quantities, it is observed to produce a motivated energized and euphoric feeling – very different from what the term typically connotes.

What are the most common THCV effects?

Though research is still somewhat limited there are a good number of known THCV effects. Perhaps the most admired is THCV’s ability to suppress appetite, which it does by inhibiting CB1 receptors in the endocannabinoid system.

One study done on animals from 2009 demonstrated this feat when it found THCV effective at reducing food consumption and weight gain1. Another study uncovered THCV’s role in minimizing glucose intolerance related to obesity. That study lends credence to THCV’s influence on overall wellness, as healthy blood sugar levels are essential for avoiding diabetes, stroke and heart disease.

Though other THCV effects are less conclusive, there’s some evidence that the cannabinoid may be used in treatment for Parkinson’s disease3, pain4, epilepsy and several other chronic conditions.

What are some heavy THCV strains?

Since it is a minor cannabinoid, THCV is far less likely to be present in the cannabis plant than other cannabinoids like CBD and THC. However, as the American Journal of Botany writes, high levels of THCV have been reported in Cannabis strains from southern Africa, India, Nepal and eastern Asia6. Durban Poison THCV is one of the strains with high THCV originating from the region, but others around the world—like Jack the Ripper THCV—have been uniquely cultivated to have a similar composition.

THCV can also be extracted biosynthetically from algae. Synthesizing these compounds from algae, utilizing advanced fermentation techniques to safely and effectively recreate the natural benefits of the cannabinoid.

What types of THCV products exist?

Because of THCV’s growing popularity, it’s become easier than ever to find THCV products of all different delivery mechanisms. For example, THCV oil (also known as a THCV tincture), THCV edibles and THCV isolate (pure THCV) are all readily available.

By using an oil or consuming an edible that has THCV and other cannabinoids like CBD, you should be able to take advantage of something called the entourage effect—a phenomenon in which the cannabinoids become supercharged due to each other’s presence, enhancing the different cannabinoids’ respective benefits. In other words, the whole is greater than the sum of its parts.

Thanks to the 2018 Farm Bill7, any hemp derivatives containing less than 0.3% THC are legal.  The regulatory landscape for this emerging compound is still being defined, and state level regulations will continue to evolve as it becomes more widely used.

If you’re interested in trying THCV for yourself, check out Liweli’s Focus Melts.  These quick-dissolving tablets that fit in your pocket feature THCV and a fresh mint flavor you’re bound to enjoy. Our high quality pure cannabinoid inputs are extracted from our cGMP certified facility in Roxboro, NC and like all our products are tested extensively at third party laboratories. Test results and CoAs are available with every product.

This website uses cookies so that we can provide you with the best user experience possible. Cookie information is stored in your browser and performs functions such as recognising you when you return to our website and helping our team to understand which sections of the website you find most interesting and useful.

Strictly Necessary Cookie should be enabled at all times so that we can save your preferences for cookie settings.

If you disable this cookie, we will not be able to save your preferences. This means that every time you visit this website you will need to enable or disable cookies again.